In this article we will follow step by step approach to create Netflix Movie Explorer Metro Application. We will use HTML and WinJS to create this application. See the video to understand expected behavior of the application.

Some of the features of application are as following

To get it started, launch Visual Studio and create a new project by choosing Blank App Project template from Windows Metro Style tab. You need VS12 to create this application. 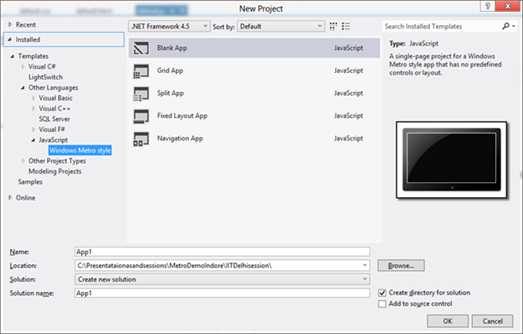 Very first we need to create data source by reading JSON data from OData feed of Netflix movie database. That can be done using WinJS.xhr function

In above code snippet, we are performing following tasks

After fetching, data is being parsed using JSON Parser and individual items are pushed to movieArray. movieArray is defined as following

After creating data source we need put WinJS ListView control on the page.

A HTML div can be converted to WinJS ListView by setting data-win-control attribute to WinJS.UI.ListView. Other options can be set like layout of the ListView. In this case we have set it to GridLayout, so data will be displayed horizontally. ListView needs data source to display data. Data source can be set either in HTML or in code behind. Let us set data source of movieListView to the movieArray.

Make sure that you are setting data source of ListView after the WinJS.xhr function call. At this point of time if you go ahead and run the application, you should be getting following output. 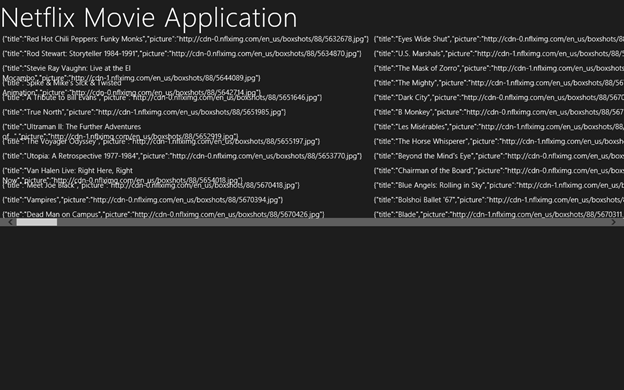 In above output, data is in raw form. To make data more immersive and to show the way we want, we need to create template out of data. After creating template, it needs to be set as attribute of ListView. Template can be created as following

Template can be created by setting data-win-control attribute of HTML div as WinJS.Binding.Template . Inside div element

Once Template is created, it needs to be attached to the ListView. After attaching Template, ListView will be as following 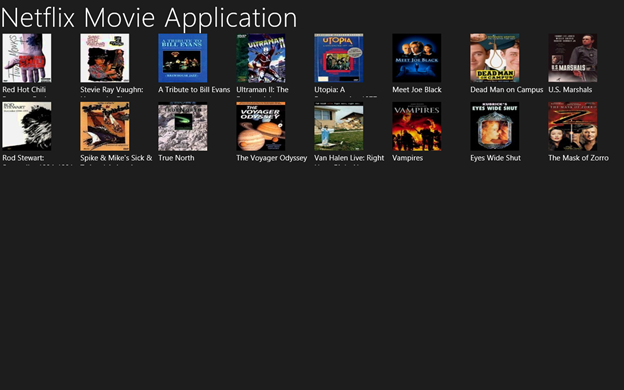 Before we move ahead, let us put some CSS on ListView to make it more immersive 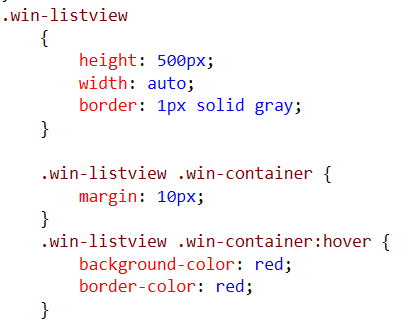 After applying styles on List View, your application should be in following shape. 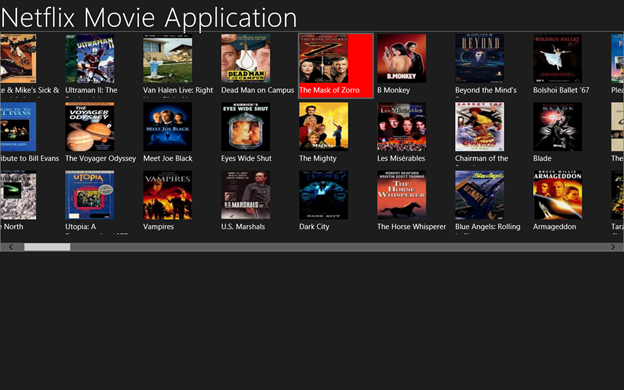 Next we want to group the movies as per first character of their title. For that create group functions as following. 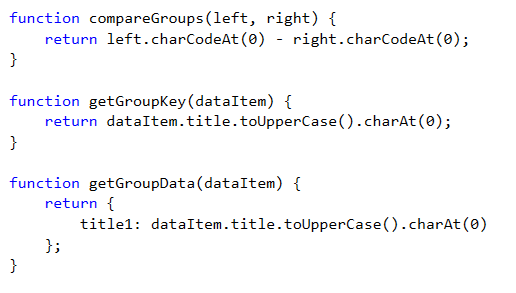 After creating grouped functions, we need to create grouped item list and set it as itemDataSource of List View. Modify setting of ListView data source as following 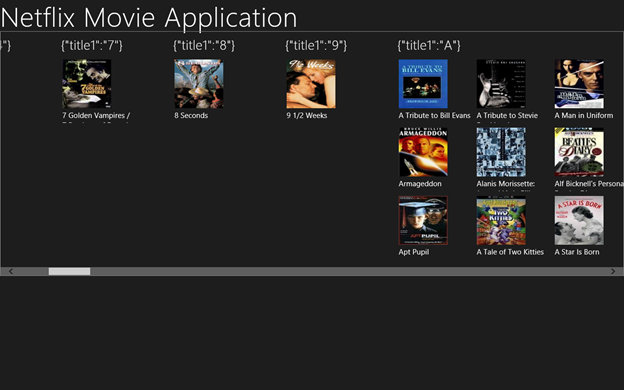 Above we can see the header data is in raw form. So to make header information more immersive, you need to create template for header and then attach that to ListView

After creating Header Template, we need to attach this to ListView. So ListView will be modified as following 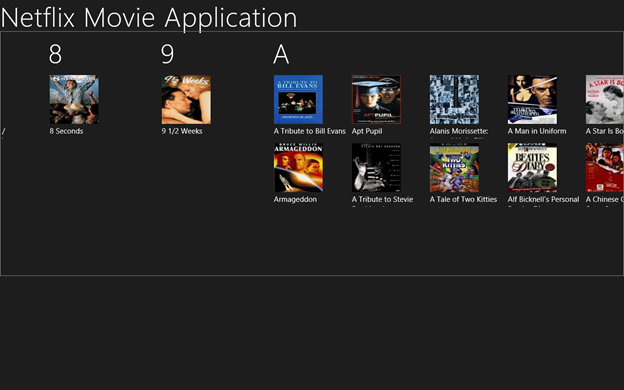 Next we need to add sematic zoom to the ListView. For that very first let us create a Semantic Zoom Template. We want to display movies with first letter of title in semantic zoom view. 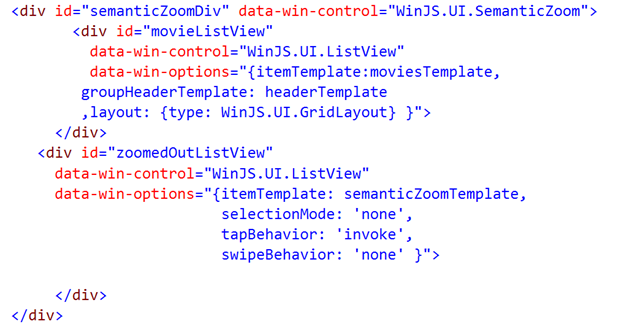 After adding Semantic Zoom view we need to set data source of it. This can be set as following.

Last work we need to do in Semantiz Zoom is to apply styles. 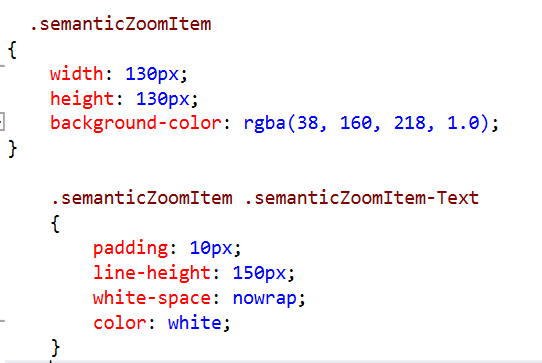 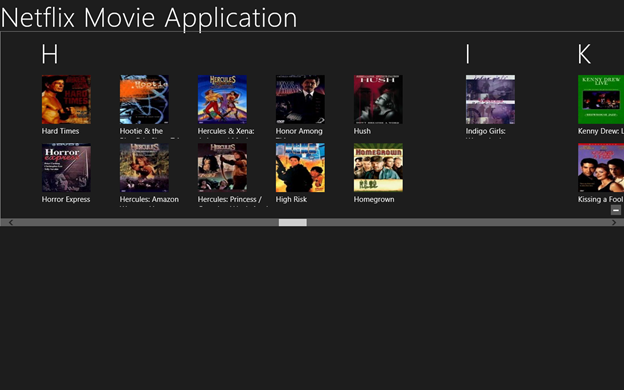 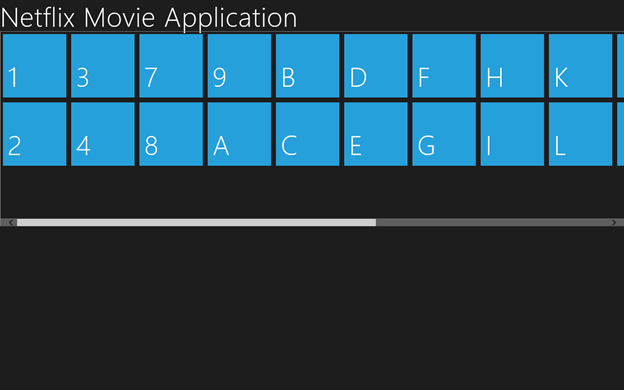 Now we need to add code to add output div. When user will select a particular movie detail of that movie will be displayed in the output div for rating. 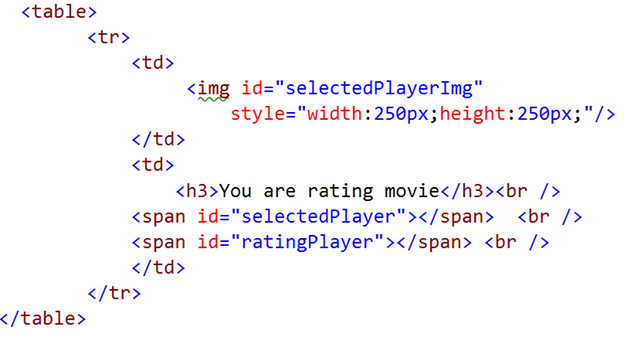 And in code behind on the touch of a particular ListView item, we need to display that information in output div. For that add the following code in code behind

In above code snippet 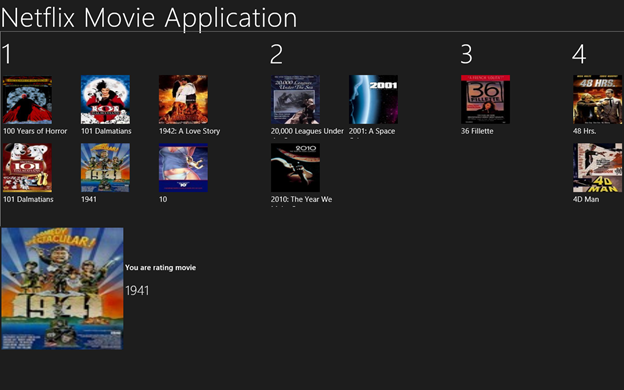 We can create a Rating control by setting data-win-control attribute of a div as WinJS.UI.Rating. Other data options like maxRating and averageRating can be set in data-win-options attribute.

After adding Rating control, we need to write code to allow users to perform rating.

In above code we are getting the request and setting the title and description in data property. After that creating text to share and setting it in the data request. Above is the code to simple text sharing via ShareContract feature of Windows 8. Once we have share function is ready, we need to get the current view of application using DataTransferManager.getForCurrentView () and attach and event handler datarequested on same. When datarequested event will be fired ShowandShareContract function (created above) will be called and user will able to share using Share Charm. 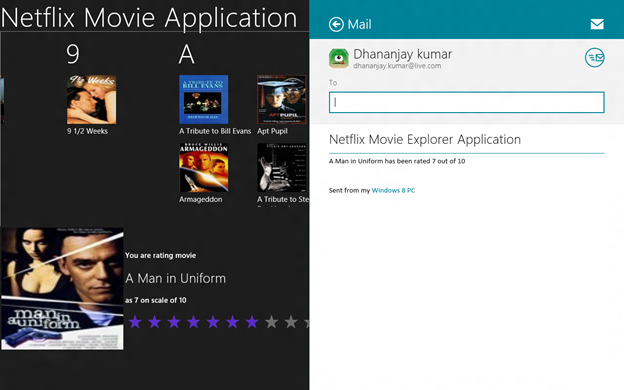 In this application user can browse the movies, rate a particular movie and then share the rating with the friends on social media or mail.

In this post we learnt to create a Metro Application from scratch. Even though you can download source code of this article from here , I am sharing the codes below . Feel free to use them as you required.

I hope you find this post useful. Thanks for reading