While building an API, the client should receive a proper and descriptive HTTP response message for each request. The Web API provides a very simple approach to achieve this.  A Web API controller action can return the following types:

To test these different types and HTTP response message associated with them, I will use REST client tool Postman.

If the return type is set to void, Web API returns an empty HTTP response message with status code 204 means no content.  Let us create an action, which returns void,

In the Postman, on performing HTTP Post operation, you will get response as shown next:

HttpResponseMessage type represents a HTTP response message which encapsulates data and the status code. Besides status code, you can also set other properties such that,

You can return HttpResponseMessage with certain properties set as shown below:

So, /api/data returns HtppResponseMessage, which has content, status code, Reason Phrase to be sent with the code, and cache control set. In the postman, you will get a response header as shown below. Also, you will notice that the status code contains Reason Phrase, “Data is processed.”

Now, in the postman client, if you set Accept Header of Request to application/XML as shown in below image,

In the response body, you will get training data from the API serialized as XML, 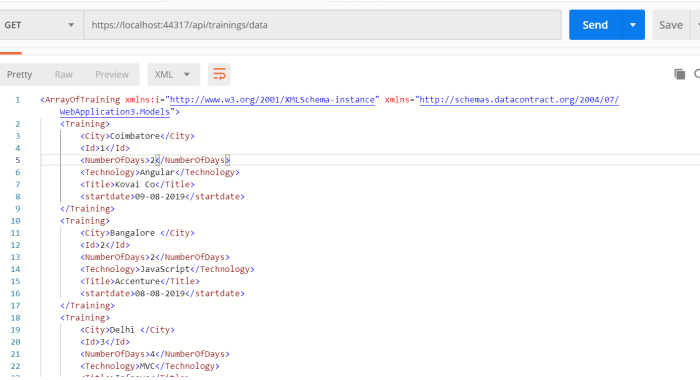 Whereas if you set Accept Header of Request to application/JSON as shown in below image,

In the response body, you will get training data from the API serialized as JSON,

The third type is IHttpActionResult, which was introduced in Web API 2.0. It provides, a factory to construct an HttpResponse message. It allows you to construct HTTP responses in a separate class, such that controllers can be better unit tested.

You can use IHttpActionResult in two ways:

Often, you can use IHttpActionResult to return a particular data in this case training as shown below,

IHttpSActionResult from System.Web.Http.Results provides two methods to return result from the action.

As you see, GetTraining action returns data wrapped in Ok method, or NotFound, if training with given id does not exist.

In the postman client, if you pass id value to 1 as shown in the below image, you will get an HTTP response with status 404 Not Found, as there is no training with id 1 exist.

We can implement IHttpActionResult to return a list of trainings in the HTTP response message, as shown below:

We are, setting various properties of the HttpResponseMessage in the ExecuteAsync method. To return list of trainings as content of the HTTP response message, we are creating object of ObjectContent and using JSONMediaTypeForammter to convert list of training in a JSON format.

Now you can use newly created TrainingDataResponse in the controller class as shown below:

Now you can test it in the postman client as shown in the image below, 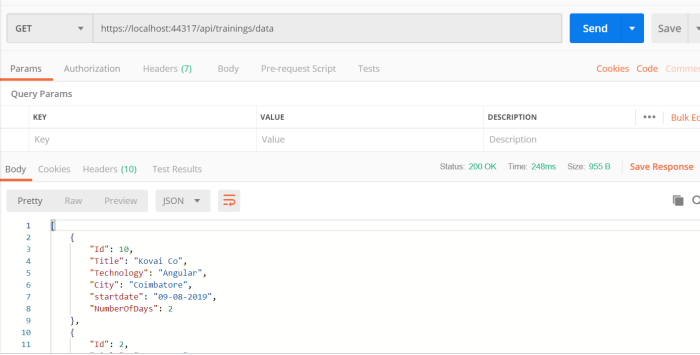 Besides the above three types, you can use any other types such as IEnuenrable<T>, List<T>, etc. To return them as HTTP response Web API uses the media formatter to serialize the returned data. Web API will write the serialized data in the body of the Http response, and set the status to 200.

Below action returns trainings, which is serialized by Web API,

In the postman, you can test it as shown below:

These are the types supported by Web API. You should use them as per your requirement.  For example, to construct low level details of HTTP response message, use the type HttpResponseMessage, and to send serialize data with status code 200, use the other types such as IEnumerable<T>.

I am a Microsoft MVP and Google GDE based out of Gurgaon, India.

I am an expert in Angular, JavaScript, NodeJS, .NET Core.

Reach out to me  at debugmode@outlook.com or on my Linkedin