Refactoring the ASP.NET MVC Application to the Onion Architecture

You may want to read on Falafel blog :

Use Types from a Project without Referencing It
Three steps to use jQuery UI in ASP.NET MVC 5
Work with ASP.NET MVC 5 Areas from different projects
Types of ASP.NET MVC Views

Let us summarize problems we discussed above:

Usual approach we follow is the Layered Architecture. In layered architecture the presentation layer is transitively depends on the database layer and that does not solve the problem we discussed earlier in an absolute way.

Onion Architecture is the preferred way of architecting application for better testability, maintainability and dependability on the infrastructures like databases and services. This term was first coined by Jeffery Palermo in his blog back in 2008.

Let us implement Repository Pattern in MvcMovieRTM ASP.NET MVC Application. You can download this app from official Microsoft site here . After downloading, open the app in Visual Studio and in Package Manager Console run the command update-database. Go ahead and press F5 to run the application. Navigate to Movie Controller and you should able to see list of movies, can edit, delete and create new movie. We are going to refactor this application to adhere the Repository Pattern. Before we move ahead, let us examine the code in MoviesController.

Follow the following steps to refactor the existing application:

Once MovieRepository class is created refactor it to extract Interface from this class. You need to move extracted interface to the MvcMovie.Infrastructure project. 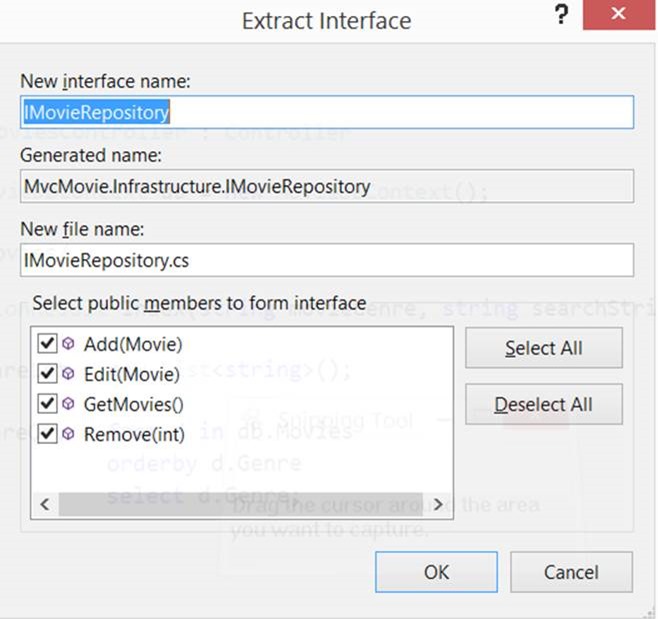 You should have the IMovieRepository interface and the Movie class inside the MvcMovie.core project. In solution explorer the MvcMovie.Core project will look as follows:

Next any database operation will be performed on instance of MovieRepository. Some of the operations are as follows:

Replace various database operations in MoviesController with the code as shown above. As of now you should successfully able to run the application.

We are directly creating instance of the MovieRepository in the MoviesController which makes Controller tough for Unit Test. In this scenario to test the Controller, you need the database. We can solve this problem by inverting the control using any DI Container. You are free to use any DI container of your choice, however I am using Microsoft provided Unity Container. To use it add the Unity reference using Nuget Package Manger. In Unity.Config (located in the App_Start) folder register the type as given below:

Once type is registered you need to call the RegisterComponents() method of UnityConfig in the Application_Start() method of the Global.asax.cs as shown below:

As the last step refactor Controller as shown below:

If you remember in beginning we were directly creating the instance of the MovieDBcontext inside controller hence the controller was fully dependent on database and was making it tough to test it in isolation.

MvcMovie application has been refactored to Onion Architecture. Next task you may want to do, is to download the code discussed in this post from GitHub and start writing test.

We have refactored the application adhering to the onion architecture. Domain objects like Movie is at the center of the architecture and are the part of internal layers. The Infrastructure project in which we are working with database and database logics are part of the external layers. They depend on the centeral layers like core. UI or in this case the MVC application is also an external layer and depndes on the Core project. All layers are interacting to each other using the interfaces rather than the concrete definitions. You can very easily write Unit Test against the controllers using Fake or Mock without hitting the datbase. In future you can easily change data access technology from Enity Framework to something else without affecting the UI and the Core.

19 responses to “Refactoring the ASP.NET MVC Application to the Onion Architecture”